8 Days Until the Madness Begins

Yes, fellow writers. It's only 8 more days until NaNoWriMo starts again. That's National Novel Writing Month in ordinary English. If you have ever wanted to try writing a novel, I strongly encourage you to participate in NaNo. It's free, it's encouraging and it's a competition with yourself... who just happens to be your toughest adversary.

Last year was the first time I played along at NaNo, and at the end of the month, I had most of my first draft of A Light in the Mountains completed. It only took a basquillion revisions and rethinkings, and now that book is available almost everywhere ebooks are sold.

This year, I'll be working on the third and final book in the series (as yet untitled). Well. Um. I've actually been working on that book since the last one was done, but I've scrapped so many beginnings that the "delete" key has the writing scraped away.

My recent epiphany gave me the start I was looking for. It finally feels like I have a story! Just for fun, here is a tidbit. I'd love to hear your thoughts, dear readers! The first few paragraphs of the next book in the Light Gatherers series:

“Cooper, stop the buggy.” Ray Harper said.
Cooper reined in the buggy mare and waited, silent.
“What is that?” Ray asked.
Miss Alice, his wife, shrugged.
“What, sir?” Cooper asked
“Over there. What’s that glow? Is it a fire? I hear a noise, too.” Mister Ray said.
Cooper looked, and listened. He did hear a faint sound. And there had been a strange glow, but it was rapidly going away. “I best go see.” Cooper jumped down from the buggy, picked up the lantern and went to investigate.
He picked his way through the undergrowth, trying to follow a sound which was fading. Fifty yards from the buggy he came to a clearing and stopped. He looked, took a few steps, listened, and looked some more.
At last a glowing spot of blue on the green grass at the far end of the clearing caught his eye. He approached cautiously, his heart pounding and his eyes owly round.
A young woman seemed to be resting on her side, facing away. The back of her skirt was darkened with water. Or was it water? Cooper heard a small sound: a mewling whimper like a sick kitten might make. He moved a little faster.
Then a sharp wail made Cooper jump back a pace. It was a newborn baby cry! He trotted to the woman, only to find her limp and incoherent. She seemed to be lying in a cloud of gold dust, with shimmering light swirling around her and clinging close to her. Beyond the cloud of shimmering light was a darkness so profound, it was as if every drop of light in the air was gone.
Cooper watched in awe as the shimmering cloud collected around the squalling baby girl, making her shine. The light shifted away from the mother, wrapped around the baby girl, and with a slow, long sigh, the mother died.
“Sweet Jesus. What was that?” Cooper said under his breath. The baby cried again and snapped him out of his wonder. He wrapped his coat around the wet baby and sprinted for the buggy.
“Mister Ray! Miss Alice! I need me a knife, and a string and a blanket, quick! It’s a baby out there!” Cooper shouted as soon as the buggy was in sight. Cooper pronounced the words, “Mister Ray”, so smoothly together it sounded like a drawling cross between “mystery” and “misery”.
Mister Ray handed over his pocket knife, with Miss Alice saying, “Oh, my! A baby!” over and over while she pulled a hair ribbon from the parcels she was carrying home from town. Cooper snatched up the lap blanket and darted off to the clearing.
When the new baby was safely in Miss Alice’s arms, Cooper went back to bring the young woman’s body, to be buried in the slave quarter graveyard. Cooper wondered what the young mother’s name might have been.
“What do you think about that, ? I thought I’d done well that day when I found a hammer laying in the road. That baby is probably worth fifty dollars, if she lives.” Ray was grinning.
“She’s a precious little thing, alright. She seems strong enough. We can give her to Tallulah to raise along with her baby. She’ll have plenty of milk, I’m sure.” replied.
“Miss Alice, give her to my Dooley, won’t you?” Cooper said. “She’s still in bed from losing this last one. She might could make milk yet, and it would help her poor broken heart.”
Mister Ray was annoyed at Cooper for speaking out of turn. He didn’t like his slaves to speak unless spoken to. He was dismissive of the idea, anyway. “Dooley clearly isn’t any good at keeping babies alive, Coop.”
smacked Ray on the chest. “That’s a dreadful thing to say! It’s not her fault that her babies have all been stillborn. You say something like that again, Ray Simpson Harper, and I’ll never speak to you again.” Miss Alice didn’t bark at Mister Ray often, which made it more effective when she did.
“Cooper, that’s a good idea. Dooley might still be able to feed this baby if she starts trying right away. And Tallulah can help some until she can. Just don’t let her go hungry for trying. Alright?” Miss Alice said.
“No, ma’am. We make sure she get enough to eat. And Dooley be thanking you more than you ever been thanked, you can be sure of that.” Cooper felt like his throat was closing up, he was so grateful for that little baby. Dooley had been so sad that she could barely lift her head from the pillow. He was sure the little orphan girl would be just what Dooley needed. 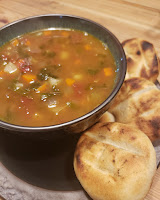 10 Things to Know About Cooking and Kitchen